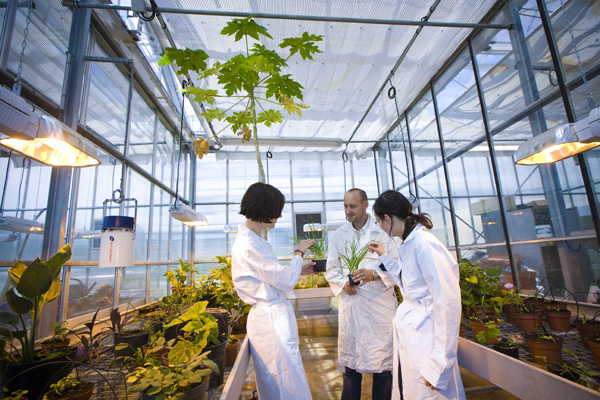 Objectives: The UMR BF2I greenhouse, located to the east of the foot of the Pasteur Building, is intended to produce the plants required for the work of the UMR, either in the context of studies of Plant-Insect interactions, or to produce certain insects that require live plants (such as pests that feed on growing crop plants in the field), and which are more difficult to produce on synthetic artificial media. We work essentially with the broad bean Vicia faba, the “universal host” for the legume aphid model, Acyrthosiphon pisum (also known as the pea aphid), of the canola/oil seed rape model Medicago truncatula, and the host plants of the major crop aphids Myzus persicae (capsicums) and Aphis gossypii (melons), which are the peach and cotton/melon aphids respectively. The greenhouse allows us to cultivate the plants in the absence of insect contamination, and we are soon going to upgrade the “Insect-Proofing” of this platform, which is also intended for occasional use by other teams on Campus that are working in the field of Plant Health.

Techniques and equipment: Automated tray watering of four independent cells (water and fertilizer). Temperature regulated independently in 3 cells each measuring 20 m2. Environment protected by anti-insect mesh, to be completed during 2010 by an insect-proof, air-locked entrance, Conditions of access: Accessible to members of the UMR, and available for projects to colleagues working in the Biology sector of the La Doua Campus. Ask the greenhouse managers.

Location: The “greenhouse” platform is located at level 0, to the east of the Louis-Pasteur Building of the Lyon INSA